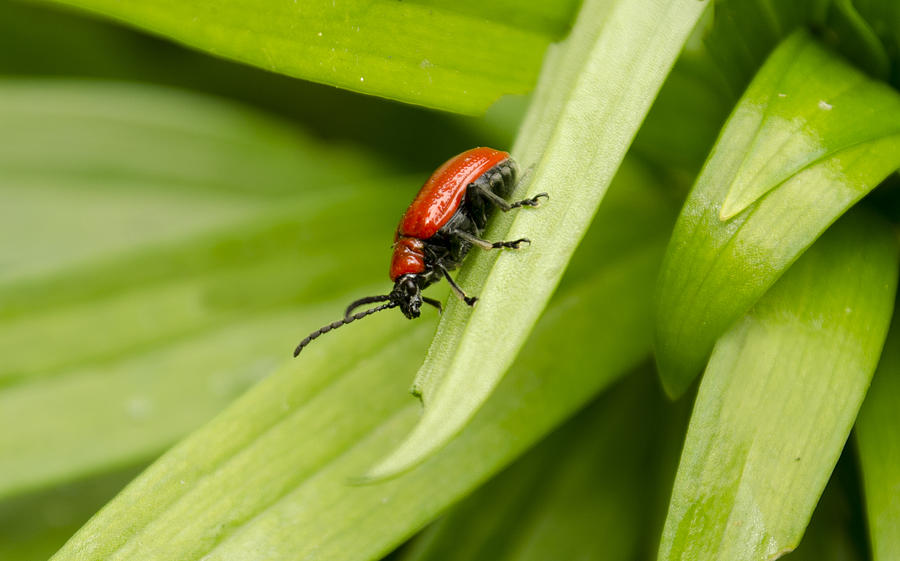 Common name Red lily beetle or lily beetle
Scientific name Lilioceris lilii
Plants affected Lilies (Lilium) fritillaries (Fritillaria)
Main symptoms Foliage is eaten by red beetles and their black excrement-coated grubs
Most active Late March-October
Lily beetle has become widespread in the UK over the past three decades and have on numerous occasions helped themselves to my plants!
Adult beetles make rounded holes in the leaves and this is how i realised i had them, i then staked out the plant waiting to find the beetle so i could photograph it.
Red lily beetle overwinters as adult beetles in soil, leaf litter and other sheltered places. This could be anywhere, not necessarily in the vicinity of lilies and fritillaries (consequently, there is no advantage in attempting to treat the soil below lily plants). The beetles begin emerging on sunny days in late March and April when they seek out the foliage of host plants. Eggs are laid in small batches on the underside of leaves during April to mid-summer. The eggs hatch and the larvae feed on the foliage. When fully fed, the larvae go into the soil to pupate. The next generation of adult beetles emerges from mid-summer on wards. These beetles add to the feeding damage but there is only one generation a year and these late summer adults will not mate and lay eggs until the following year.