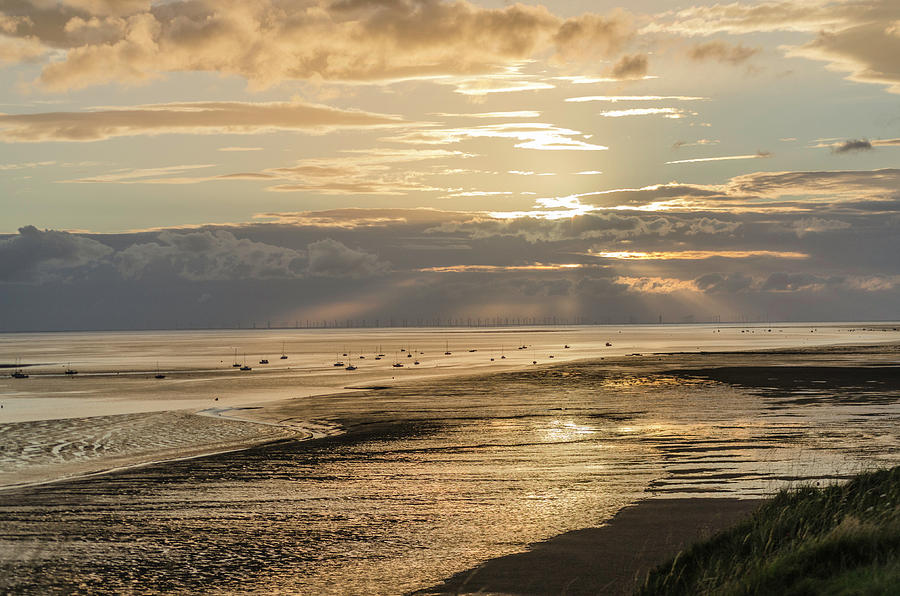 On our evening walk with the dog we walked along the beach at Thurstaston, Wirral, the light was unbelievable all golden and warm turning the sea into molten metal. Then rays of light shot out from the clouds, amazing.

(http://wxguys.ssec.wisc.edu/2011/06/05/what-are-the-light-beams-coming-from-clouds-called/)
Brilliant beams of light extending from clouds are often seen during the early morning or early evening when the sun is shining. This phenomenon is known as crepuscular rays, as it occurs during crepuscular hours — those around dusk and dawn.
Rays of light can change direction when they encounter small particles suspended in the atmosphere. This changing of directions is called scattering. A cloud between you and the sun can block some but not all of the sun’s light. The darker regions are the shadowed area of the cloud. Where the light peeks through the object, scattering illuminates its path from the sun to your eyes. This creates beams in the sky.
These beams appear to converge toward the sun but this is an illusion, similar to the impression that the rails on train tracks appear to come together in the distance.

Congratulations your beautiful work is being featured in The World We See Group:-)

Thank you Robyn, im glad you like the photo!